This article is part of our FCIA Raising the Bar Column, produced by members of the FCIA exclusively for Bartalks. You can learn more about the. benefits of FCIA membership on their website.

Working in developing countries brings with it a seemingly endless slew of challenges. So why bother? In the case of Moka Origins, the company was literally founded to support cocoa farmers in empowering themselves.

Co-Founders Jeff Abella and Ishan Tigunait had done humanitarian work in Cameroon for years prior, as had many of their tight-knit team. It was only after spending time with communities trying to find ways to provide opportunities that the idea of crafting high-quality bean-to-bar chocolate took root.

Cameroon’s fertile, verdant slopes provide an ideal climate for growing cocoa. Yet the reputation of Cameroonian cocoa is, simply put, not good. When manufacturers are only looking for cocoa mass and aren’t willing to pay for quality, farmers are disincentivized to employ techniques that will generate a high-quality bean.

Poorly-fermented beans, or beans that are simply dried without fermentation, become the norm. Farming and post-harvest techniques become lost, and makers interested in exploring the myriad complex flavors cocoa beans can express will look elsewhere.

What if the opposite is also true? Given the outstanding terroir and the dire need for economically viable professions, can proper techniques be implemented?

Will small-batch single-origin makers pay a premium for Cameroon beans? If so, the lives of many cocoa farmers would be transformed. To some extent, this remains an open question. But there are signs that, so far, it is working. And despite the difficulties inherent in the undertaking, Moka Origins seems committed to improving the lives of cocoa farmers.

Growing food for Sustenance or Cash

In their small factory, a series of a handful of photographs tells the story of cocoa production, as in many chocolate factories and shops around the globe. We see that chocolate is the seed of a tropical fruit, and that the pods grow right off the trunks of trees.

Images of a fermentation vat and drying beds follow, after which we are treated to an interior view of a hulking warehouse in which row upon row of burlap sacks of beans are stacked. But one picture looks a little out of place. Are those plantain trees?

The first plantings in the first grove cleared on the Moka Origin farm were a stand of plantain trees. Papaya, mango, and medicinal plants followed. This enables the farmers to feed themselves and to bring produce to local markets instead of relying solely on cocoa sales to live.

Knowing you will have diversified income helps you negotiate from a stronger position, and selling medicinal herbs to neighboring villages helps diversify your revenue stream. In this way, a farmer-centric approach to cocoa production doesn’t begin with the assumption that only cocoa will be nurtured, but that any plant which will, in turn, nurture the farmers is worth planting.

Ask any Moka Origins employee what the hardest part of getting the farm going was and you’ll soon hear the word “infrastructure”. There weren’t roads leading to the farm. Or running water. Or electricity. How do you get infrastructure? You need the right team.

Steven Odnoha designed, built, or modified several of the machines at the Moka Origins factory. The bespoke winnower, for example, is made from a commercial juicer. He also spent time in Cameroon when the farm was just getting going, lending his engineering acumen to the project.

Young cocoa trees benefit from irrigation. Eventually, the taproots will be long enough and the leaves will provide enough shade for natural rainfall to keep the plants watered, but for the first few years or so the seedlings need to be watered. Odnoha described some of the considerations along the way to getting that critical irrigation up and running.

A water tower would enable gravity to pull water towards the plants. What is the tower going to be made of? Wood, at first. Until voracious termites discover the wood and make short work of it. So, you pivot, and now you have a concrete water tower. What about a pump? Are you going to use diesel or electric power?

Remember, you can’t rely on the power grid. It doesn’t extend to the remote farm, and even in heavily-populated areas, power spikes are perhaps even more detrimental than frequent outages. “I’ve never seen so many melted power strips,” another team member observed.

Ask Odnoha what sense of accomplishment he feels about the irrigation system or other infrastructural projects and he counters with a 10,000 foot view answer: Achievement comes from problem-solving. The pump must not be destroyed when the river floods. Regardless of whether the water level is high or low, a floating pipe will draw water from the relatively clean surface, rather than muck submerged towards the riverbed. One consideration after another becomes a series of puzzles. The prize for answering correctly is that you get to tackle the next puzzle.

Moka Origins believes that simply by paying farmers a fair price for their beans you are making a real difference in their lives. Additionally, by educating them in production techniques you are making the results of their labor more valuable and helping them gain skills, some of which will be transferable beyond the production of cocoa beans. However, what if the bean-buying dries up?

If you visit the Moka Origins factory store or try to order bars from their website, you won’t find any single-origin Cameroon bars in stock. Cameroon is in the middle (or towards the end, hopefully) of a civil war, making logistics challenging and quality beans hard to come by.

There’s not much a small chocolate start-up can do in such a situation. But while local food markets were shut down, the cocoa farmers gave away surplus plantains to other farmers nearby. And when beans were still available, nearby farms were keen to learn the fermentation techniques so important in developing high-quality cocoa beans. The Moka Origins farmer-centric approach is benefiting a broader community than just their own farm employees. 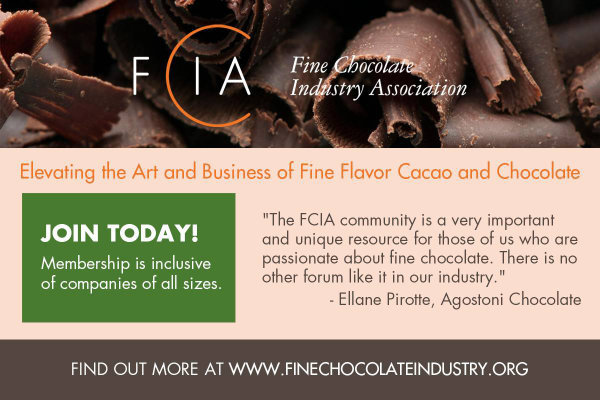 Since CEO Abella’s background is in international development and not chocolate making, learning from other chocolate makers has been key. The FCIA serves as a critical resource. As Moka Origins scales up to meet growing demand, fellow FCIA members have been extraordinarily generous with tips about the pros and cons of larger melangers and winnowers, even sharing specific settings for certain beans.

The civil war in Cameroon appears to have come to a kind of pause. Not a stalemate, or a treaty, but fatigue has set in. Nobody knows how it will resolve, or when life will return to “normal”. Cameroon farm manager Edwin Ngong shared his perspective, describing some of the concrete benefits he has seen.

Earlier this week a neighboring farmer came to thank him for the gift of plantains when food was hard to come by during the more intense fighting of last year. Another nearby farmer expressed enthusiasm for cocoa farming and will be given seedlings. Ngong points out that “giving planting material without training is useless” and will ensure that knowledge of how to nurture seedlings appropriately is passed along.

Ngong says there is good reason to be optimistic. While formerly any travel was impossible, now he can travel to and from neighboring farms, or from the farm to town. Checkpoints set up by either side let him pass. He believes both sides appreciate the value of the work he is doing.

What is he looking forward to? Soon quality cocoa seedling varietals distributed to nearby farms will be mature enough to enable the harvesting of cocoa to begin. He is already sharing better fermentation techniques with other farmers and intends to invite other farmers to use Moka Origins fermentation vats if they are unable to build their own.

Instead of three days in a nylon bag tied to a tree with no agitation, the beans will ferment for six days in wooden vats. Mixing and agitation will occur efficiently, as the design of the stacked container system makes use of gravity, similar to the irrigation system. Ngong said the irrigation system constructed in 2016, by the way, is still running perfectly.

Moka Origins is on a mission to bring African origins to the premium chocolate world. As an appreciation for craft chocolate continues to grow in the USA, many makers of high-quality products are bringing fair trade ethics to a mainstream market. Moka Origins is engaged in using craft chocolate to generate better economic outcomes for farmers in Cameroon and elsewhere.

Our thanks to Erik Sanner, Jeff Abella, and Mark Larson from Moka Origins for the article, and to Bill Guyton from the FCIA for pulling everyone together.

1 thought on “SOCIAL CHANGE FROM ETHICAL COCOA AND COFFEE: MOKA’S STORY IN CAMEROON”